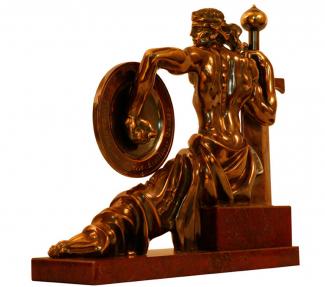 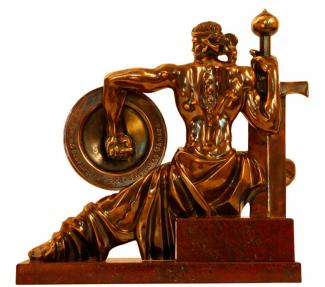 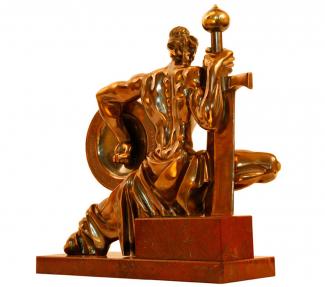 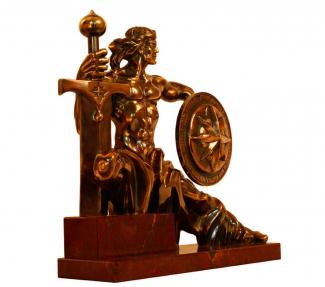 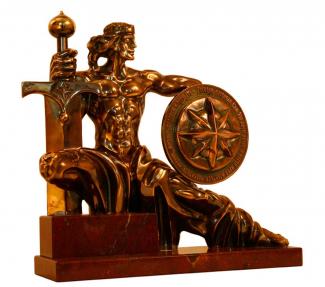 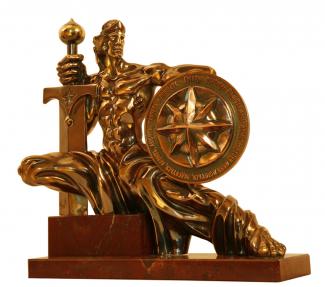 In the sculpture “Winner’s Triumph” we can see several symbols: a shield with an eight-point star, a prayer on the shield, a dome-like handle of the sword, the figure of the winner, looking confidently into the distance.

The weapon is a symbol that represents will, directed at a particular goal.

The shield from ancient time has been considered a symbol of protection. The inscription on it is one of the prayers of the Optina sages that forms the main principles of a healthy society. They are BELIEF, HOPE, LOVE and of course FORGIVENESS.

The eight-point star is a symbol of the Virgin. The Most Holy Mother of God is the protector of Russia. Russia is called her earthly lot. The Virgin’s symbol is the eight-point star of Bethlehem, the star that led the Magi to the manger of Christ Child, the Savior of the world.

The sword is a weapon that is used for both protection and attack. It is a symbol of supremacy, leadership and a sign of God’s selectee. According to the rules of heraldry the sword held with its point on the ground means reliable protection of country interests. In the times of Christianity the sword becomes a symbol of faith and strength.  People used to stick it into the ground and pray before it.

«Dear Lord, rule my will thyself and teach me to pray, hope, believe, love, endure and forgive …»

A prayer of Optina sages.