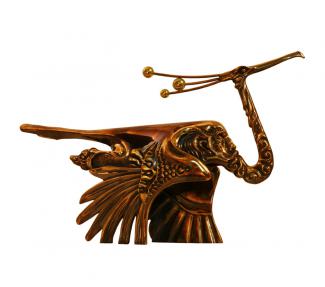 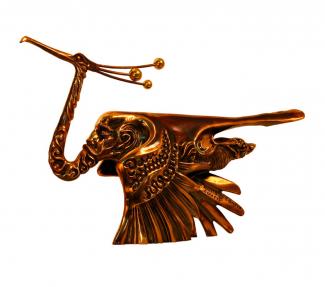 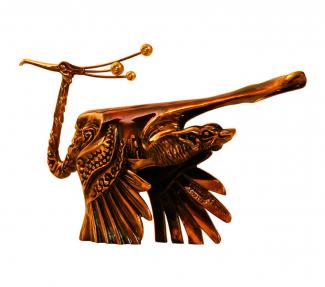 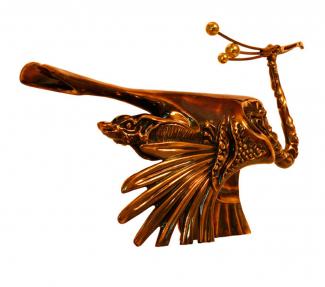 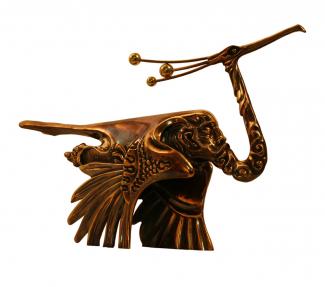 Oh, Lord, invincible passion
have You engendered into us
but You Yourself do not allow us
to give oneself to it!

The composition is not either an allegory or a picture of passion: it is meditation on its nature encoded by symbolic images. Every image can exist on its own. The flexible neck of the bird turns into an elephant’s trunk as well as into a sage’s beard. What is important is the concept of perception. The bird’s tail also has a specific meaning. It is like a gun’s muzzle which warns that passion kills. Under the bird’s tail there is a small predatory beast with pinned ears and exerted eyes. It settled inside causing concern. The passion beast lives until it is fed.

Those lacking in the intrinsic energy for feeding this beast become passionless.

Passion inspires but it makes us reckless. If wisdom does not control passion it becomes destructive. That is why the sage’s face looking in the opposite direction from the beast is of extreme importance. The sage’s face and the image of an elephant symbolize wisdom. The sage’s beard smoothly transforms to the tail of the Phoenix bird. “For thousands years Phoenix, the steward and priest of the heavenly gardens and sole possessor of the secret of the Sun, has lived in the blissful land among the trees of the sacred grove unmistakenly telling the pace of time. Phoenix is the bird of fortune which acquired from God such an unusual lot – to reborn from itself having passed through the gates of death. Having repelled its life he can get it again to resurrect from dust and get eternal life dead but revived.

Lev Gumilev defines passion as a surplus energy received from the space for solving superproblems. In his understanding, poets, artists, travellers, managers and military leaders are «passionists». They are obsessed with passion which makes them act, move, risk, behave indiscreetly and unreasonably.

The one who has once experienced the complete satisfaction from creation will not be able to live without it anymore.

But passion is of  dual nature. It can create and destroy. This is a state of burning. Most people are burnt immediately. Those who are able to control passion by wisdom can live and create for a long time.