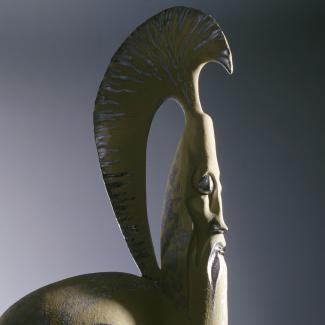 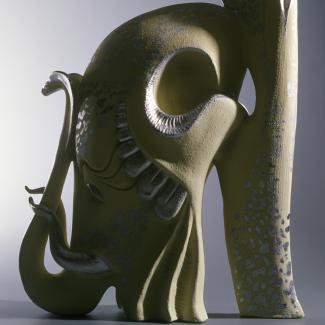 …The dust of oblivion covers us all,
But two will outlast it without a fall:
The sage’s wise speech and the hero’s feat
All men through milleniums will cherish and treat.

The figure of the motionless winged sphinx combines two worlds. On one side there are Greeks led by Alexander Macedonian marching to India. On the other side there is a mysterious and enigmatic world of India.

The compositional structure of the images is a single entity. It presents an elephant whose trunk is raised and gradually transforms into a cobra’s head. The elephants are the mysterious beasts Alexander Macedonian’s army faced during their march to India.

On the other side of the composition there is a figure of a great commander whose name will live for centuries. On his head he has a Corinthian helmet, a symbol of Greek military culture and a distinctive mark of Hellenic kings and commanders. His calm face is outlined by a beard that touches the ground. Considering himself an offspring of Zeus in his dreams he is doomed for solitude among the mortal and grandeur among Gods.