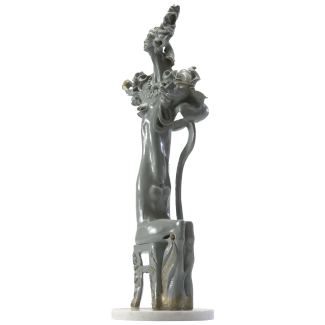 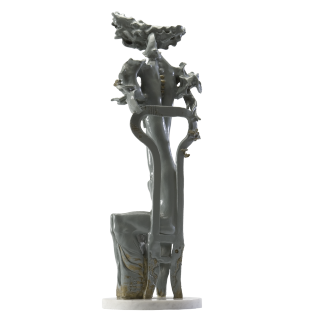 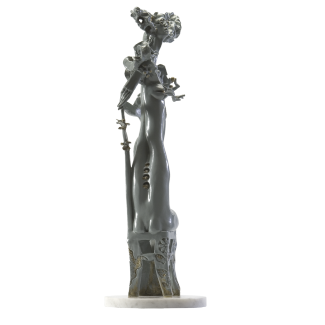 Margarita is wearing glasses and has a body stretched in a grotesque way. She isn’t holding the manuscript that “can’t burn”; there is no Mephistopheles   or cat Hippopotamus around. The Master is only represented by a straight embossed flower on the leg of the chair. Margarita seems to be torn and twisted by a fierce power, her hair being lifted by the last exhalation of life.

The upper part of the composition reflects some striving for life, but the woman’s eyes are covered by glasses, through which she sees a different dimension. Her right arm is still reaching for the steady chair, however, she is touching it slightly without an attempt to hold it.

The lower part of the composition has a calmer spirit than the upper one, but it is there that the birth of the storm begins.

Her right breast looks like a cracked overripe pomegranate, and the grains are pouring out of it. The fingers of her left hand are nervously clutching a golden sphere, the symbol of soul. Several more golden balls are placed in the cuts on the back and denote the backbone. They are the last surge of life that is leaving the body. The same fierce power that is tearing and twisting Margarita’s body distorts the chair she is sitting on. Even the stretched arched contour of the chair’s back symbolizes a cloud rising up.