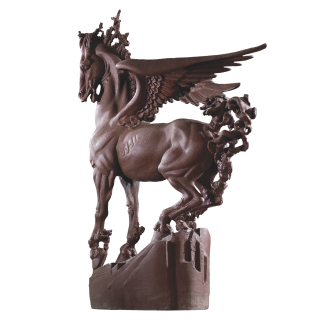 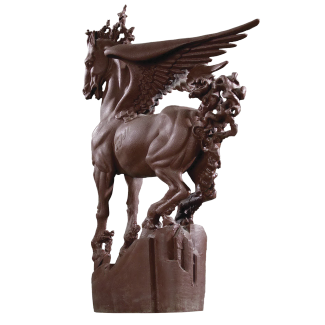 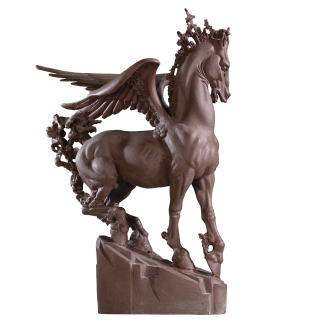 The winged horse sprang from the blood of Medusa when Perseus cut off her head, but he did not inherit anything evil from her. Pegasus became the symbol of heavenly blessing, which comes every time one manages to pass “Medusa’s trials” – darkness and chaos. Pegasus’ wings are the symbol of its heavenly nature. These are the wings of divine inspiration and heroic enthusiasm. Not everyone is able to saddle Pegasus. In order to do it one needs a golden bridle – a symbol of a clean soul and heroic spirit.

In Asia Minor the winged horse was worshiped as an embodiment of a divine being. The most important and famous Vedic ritual was “sacrifice of the horse”. The horse personifies Space and its sacrifice means creation. The ritual was meant to clean the whole country from sin and provide fertility and prosperity. This ritual can be traced in the cultures of Germans, Iranians, Greeks and Romans.

In Iranian mythology there existed the following image of the universe: the space was presented as a chariot harnessed with four horses, embodiments of fire, water, earth and atmosphere, which makes cyclic turns. At the World’s end the horses will get out of the charioteer’s control and will fight until one of them (the fire) swallows the rest.

In Buddhism the horse is something indestructible, a hidden nature of things. The Winged or the Cosmic horse (Black Cloud) is one of the images of Avalokiteshvara. In Japan one of its manifestations is goddess Kannon, the merciful Great Mother.

In Roman culture the winged horses are harnessed into the chariots of Apollo and Mitra. In Christianity  the horse symbolizes the Sun, bravery and nobleness. The horse is the emblem of Saint George, Martin, Mauritius, Victor.

Horses are mentioned in the Koran as well. The horse is one of Allah’s wonders. In Muslim culture the horse is a hunter, a warrior. When the ruler is sitting on its back, he is demonstrating his power. The horse is connected with Heaven. It is on the back of this marvelous creation of Allah, named Alborak (“Glare”, “Lightning”), that prophet Mohammed  accompanied by Jabrail  accomplished his night journey and ascension to Heaven to Allah’s throne. Before Mohammed Alborak had served other prophets. Mohammed tied the horse to the same ring at the Jerusalem Wall that Ibrahim (Abraham), Ismail (Moses) and Isa (Jesus Christ) had tied him to before. In Jerusalem a stone named Alborak’s saddle is still preserved.

The image of the heavenly winged horse exists in many world cultures and is connected with the Sun cult.